She is a Polish girl in America
Tall, tanned, hot blond, called Anya
I asked her why would you want to be a Hollywood wife
"Because I don't want to end up living in a dive on Vine"
A dive on Vine"

Air hostesses doing gossip magazine
Crosswords on a flight to JFK
Thirty nine years old
With a mile high sheen
Trying to stimulate a mind
That is slowly starting to decay
I itch my skin, I jump up and say
Lady, I know why your thoughts turn gray

A fat security making plays for me
As soon as I touch down in, old L.A., he said...
"Oh my god, you look just like Shakira
No no, you're Catherine Zeta"
Actually, my name's Marina 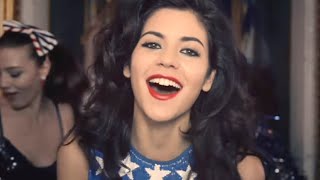 Songtext & Übersetzung What if we rewrite the stars? Say you were made to be mine Nothing could keep us apart You'd be the one I was meant to find It's up to you, and it's up to me No one can say what we get to be So why...

Songtext & Übersetzung I was born from one love of two hearts We were three kids and a loving mom You made this place a home A shelter from the storm You said I had one life and a true heart I tried my best and I came so...